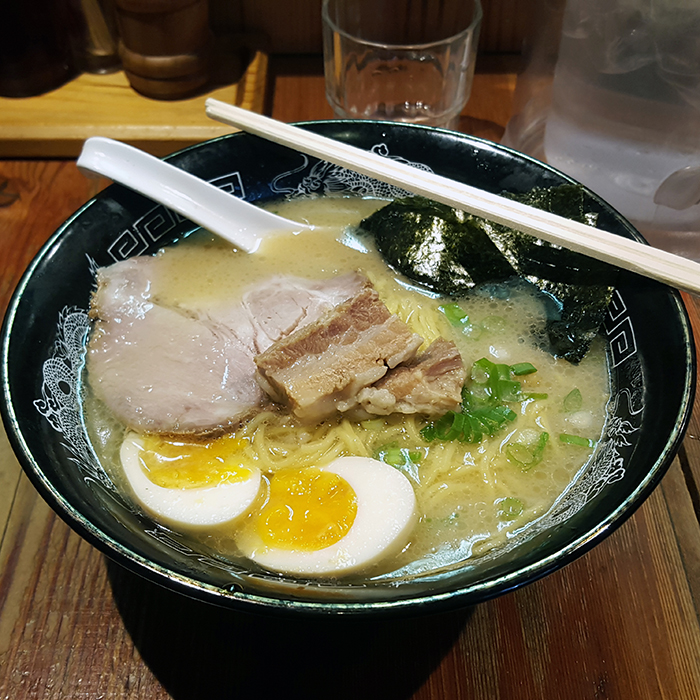 Tokyo was full of delicious food. When you think of Japanese food people mostly thing of sushi, maybe noodles. But Japanese food is so varied – my advice is that you should try as much as possible. Of course you should also try sushi, because that will be high quality, but don’t shy away from ramen bowls, tempuras and rice bowls. Don’t shy away from fast food either – I find it interesting to try the local versions of Burger King or local fast food chains. You would be surprised be small differences.

What is great with Japanese restaurants is that in their windows, they have replicas of the foods they serve. At first, this tempts you with its bright colours, but then you actually get to see what the plate looks like, how big it is, what it contains and how much it costs. Great for people who don’t speak the language.

The staff is always nice and welcoming, you are always greeted with a free drink, be it water or tea (hot/cold) and sometimes even a small miso soup.

Temma Curry was the first restaurant we ate at in Tokyo. It was after we strolled through the Yoyoki Park and checked out the Meiji Shrine. Also after we have been walking on Omotesando, looking rather different than Shibuya. The plates here were around 1000 Yen (around 8E). I do not remember the name of my plate (though I remember it was not a strictly Japanese dish), but what I had was rice, and on top of it wasthe salad, then a mix of meat and curry and the egg. When the waitress asked me the spiciness, I thought I was brave and asked for the minimum amount of spiciness, even though I could have asked for no spiciness at all. Needless to say, I could not finish that mix and after a few bites, I decided to just eat around it. Lesson learned – always take without the hot spices. Otherwise, it was absolutely delicious. My husband took some rice with eggs and bacon, but the bacon was thicker than what we owuld usually make.

This one was on the day where we passed through Ginza to reach to the Tsukuji fish market and then the Tokyo Skytree. I was not necessarily a fan of tempura, but after that day on I actually chose many tempura dishes as restaurants. What I took was a sashimi tempura menu. First, I was served a small salad with lettuce, peas and corn, with a miso soup. After that was done, I received my sashimi plate, then the bowl of rice, tempura sauce bowl and the actual tempura followed. I paired the entire meal with an Asahi beer. After I was done, I could say that I was full but not in a I-just-ate-a-giant-pizza kind of way. I was surpside to see that at the ends we were served a scopp of mandarin ice cream that was so refreshing and had such a strong taste. I do not remember exactly the price, but I think it was around 2000 Yen per person (around 16E)

We were kind of craving burgers, so we decided to compromise and check out the Japanese chain Mos Burger. We had Teriyaki Chicken burgers with fries and onion rings. They were really delicious, but what I noticed was that they were so much smaller than what we are used to here. Maybe 1/4 smaller? But at the same time, we realised such a burger still fills you up.

Pie face is an Australian chain serving small pies filled with either sweet or savory fillings. They also serve soups and hot drinks. I had a strawberry cheese pis, but now I wish I tried a meat pie or an avocado pie too. Really difficult to choose in such places.

We actually tried two izakayas in Shibuya, the first one was

This is another Izakaya in Shibuya, not far from the one above. there were many table with people being loud and having fun so that made the atmosphere really lively. And the food was flawless as always.

After browsing online on topics such as – must eats in Tokyo/Japan – I found that vending machine restaurants are quite common, and as we saw one the night before on our way to the airbnb, we decided to try it for breakfast. Basically there is a vending machine (English language available) where you see pictures of the dishes and set meals they serve. You pick what you wish (rice bowls come in difference sizes), put the money and the ticket you receive back, you have to give it to the waiter. You will be seated and in a few minutes your food will arrive. As this is a chain restaurant, you should find it around Japan – it’s not hard to miss, as the shops are yellow at the entrance on the outside, and the logo is a red circle, with two smaller circles in it (one yellow and one blue). I took a set meal with marinated beef, salad, rice bowl and the free miso soup. Don’t be afraid to try out the different condiments and sauces on the table – truly delicious

As I cannot read Japanese and thus I don’t know the name of the place I will just also attach a photo of how it looks on the outside. To get an idea of the area, imagine you are facing the 109 Shibuya shopping centre. take the street on the left, cross to the left and as you go up that street, this ramen place should be on one of the streets to the left. It’s not so far, so I am pretty sure you would find it. It’s also a vending machine place, where you pick your bowl, your drink and then give the tickets to a waitress. I have been craving ramen for some time, and I am glad I had real ramen soup. So delicious.

After we realised the Sky Tree was great and had many things to offer, we came back for a second time for the aquarium and to have a bite to eat. We mostly aimed for Japanese food, but now we gave in to Chinese food. It was absolutely delicious. We had each a ramen soup, and we share a plate of shrimps in sweet spicy sauce and 8 big gyozas (meat dumplings), that we couldn’t finish because that was just too much. I honestly do not remember the name of this restaurant and could not find it online. But it is in the Sky Tree on one of the lower restaurant floors (the 6th one I think)

What other food recommendations would you have for Tokyo? If you’ve been to Tokyo have you been to one of those places?