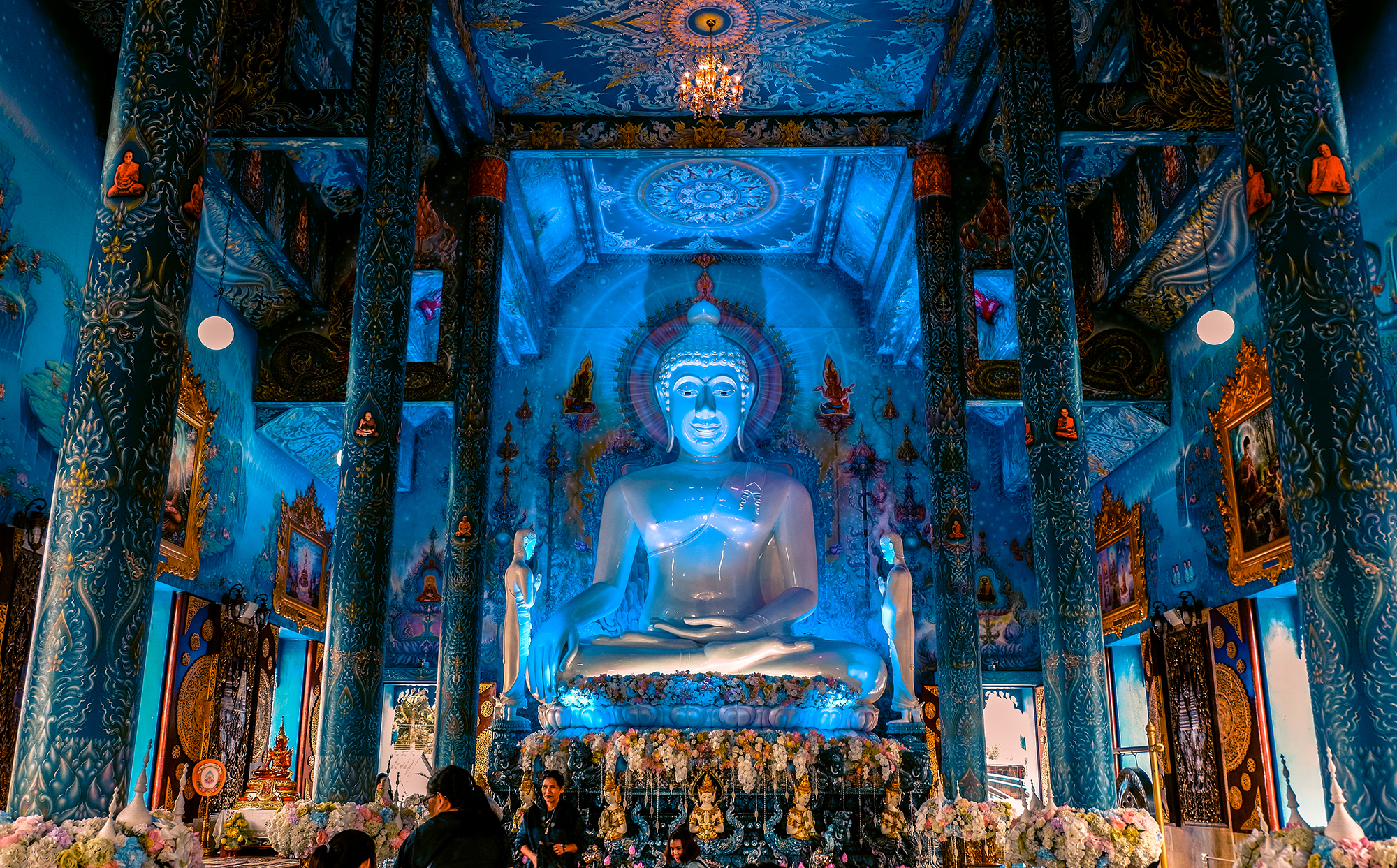 If I had unlimited time in Thailand, I would have spend at least a few days only in Chiang Rai. Unfortunately, we had time to spend a few days in Chiang Mai, and squeezed in a day trip to see the beautiful temples in Chiang Rai. As organised day trips are, this was rather tiring. A 3h, almost 4h ride that felt like forever. Luckily, there was aircon and most of the people were sleeping on the way back, tired after a full day of exploring.

The first thing that you get when you type ‘Chiang Rai’ into Google, are beautiful photos of the stunning Wat Rong Kun, also knows as the White Temple. The temple was designed by Thai artist Chalermchai Kositpipat in 1997. The place is a complex of the temple, an exhibition building and a golden toilet (yes, the most beautiful toilet in the world). The temple is surrounded by a pond, which you are crossing on a bridge. Closer to the temple, you notice that on both sides of the bridge, it’s hell; with its hands desperately looking for help, and strange creatures. Among the hands, you will notice one that has nail polish, a woman’s hand; our guide explained to us that it’s because women rarely go to hell but most of men do. The temple is very imposing, with its extravagant architecture and blinding white on the outside. On the inside you will notice not only the Buddha statue present in all Thai temples, but also apocalyptic scenes featuring pop culture references (such as Michael Jackson and Avatar). Be aware of the fact that it will be very packed with tourists, with everybody pushing each other for the perfect shot.

After 20 minutes, we reached the Wat Rong Seur Ten, also known as the Blue Temple. A blue and gold beauty, inside and outside. This temple is also a recent one, with the construction having started in 2005, on the ruins of a previously abandoned temple. You might notice the extravagant style of the White Temple. That’s because the artist that designed it is a protégé of Kositpipat. The temple is know as the Blue Temple, but its name actually means ‘House of the Dancing Tiger’. While the temple looks rather tame on the outside, be prepared to be greeted by a hypnotizing indoors. With detailed decorations and vibrant colors – especially blue – you are sure to be mesmerized by it!

The Black Temple, also know as the black house or Baan Dam Museum, was the last stop of our Chiang Rai region trip. The Baan Dam Museum is around 5 minutes by car from the Blue Temple. This museum is a work of Thai National Artist Thawan Duchanee. It has a rather sinister vibe, as it reunites several structures, showing the artist’s collection of animal pelts and bones. The centerpiece is a black building that looks like a table, hosting a long dining table and chairs made from deer antlers. I have to say that compared to the colorful and extravagant White & Blue Temples, the Black Temple had a rather dark feeling.

I enjoyed all three sights and was surprised to see how different they were from the ones I saw in Bangkok and Chiang Mai. From all three, I would say that the Blue Temple is my favorite. Not only because it’s not so famous as the White Temple, but also because of its regal allure, with the blue & gold all over.

Have you visited any of the Chiang Rai attractions above? Which one would be your favorite?