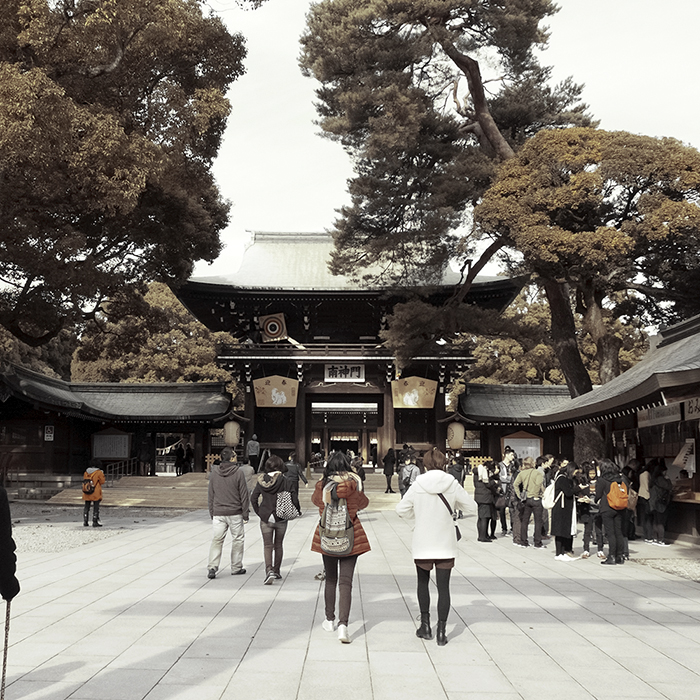 The first attraction we officially visited was the Meiji Shrine, after a walk through Yoyogi Park. It was a rather warm sunny Christmas day when we decided to walk on foot from Shibuya to the Meiji Shrine, then a bit further to Harajuku and Omotesando. It’s always easy to overdo it on the first day when you visit a new place – all the excitement and energy (even after so many hours of travelling). That being said, the following days we used the underground a lot because it spared us a lot of pain – literally – pain in our legs and feet.

The Meiji Shrine was the first thing – after Shibuya – that I really wanted to see in Tokyo. We were not allowed to take pictures inside shrine, but I will share pictures from the walk until the Shrine. As it was winter, the park was rather grey. I would imagine the park being full of cherry trees (there are around 600 in the park around!) – I am convinced that Japan would be much more magical in the cherry blossom season.

The Meiji Shrine is a Shinto shrine dedicated to the Emperor Meiji and his consort Empress Shoken. After they passed away, the people wanted to commemorate their virtues and donated 100,000 from Japan and overseas. The shrine was established in 1920.