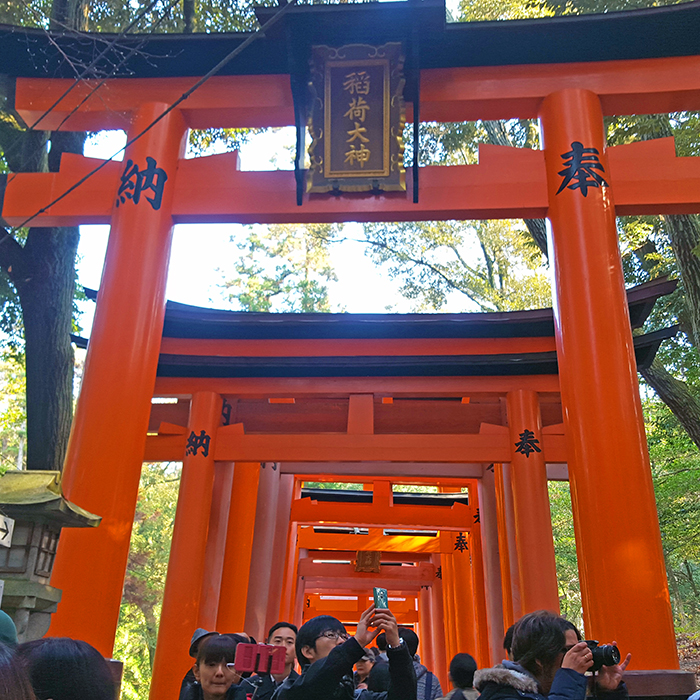 We have spent 3 days in Kyoto, and compared to Tokyo, it was smaller, quieter and less crowded. It was like a break from the hustle & bustle of Tokyo. What we did there was, besides of eating great food, was visiting a lot of temples and museum. It is true that most were close in Tokyo, as we happened to be there between Christmas and the New Year. Kyoto was once the capital of Japan – and is famous for its thousands of Buddhist temples, Shinto shrines, traditional wooden houses and the geishas of the Gion district.

Wander through Nishiki Market and don’t forget to check out the food stands, restaurant and shops with anything from phone cases to beauty products and clothes. We discovered there the most delicious cakes – filled with white beans paste.

The Kyoto National Museum is one of the oldest and most distinguished museums of Japan, hosting a wide variety of cultural properties, including archaeological relics, sculptures, ceramics, calligraphy, costumes and paintings. During the time we were there, there was also a temporary exhibition around how monkeys were depicted in paintings and poetry, celebrating the Year of the monkey.

Fushimi Inari is an important Shinto shrine, famous for its thousands of vermilion torii gates, forming a network of trails behind its main buildings. The trails lead into the forest of the sacred Mount Inari. Our hotel was at the train station and after seeing the temple was just 30 minutes away we thought it would be a nice walk. Unfortunately, it was not that pleasant – the walk was rather boring and tiring. It did not compare to walking 30 minutes through exciting Tokyo. My advice would be to definitely take a bus. The temple was lovely and walking through the torii gates was mesmerizing. Next time I would try and come earlier – even though we got there at around 10am, there were a lot of people there.

Checking out the Gion district is a must if you’re passing by Kyoto, being the most famous geisha district. It’s the place where you can attend a traditional dance performed by a geisha or have some delicious Japanese tea. I hear that even if you are in the neighborhood, you could spot a real geisha in the street. Part of the Gion district it also the Yasaka Shrine, a Shinto shrine once called Gion Shrine.