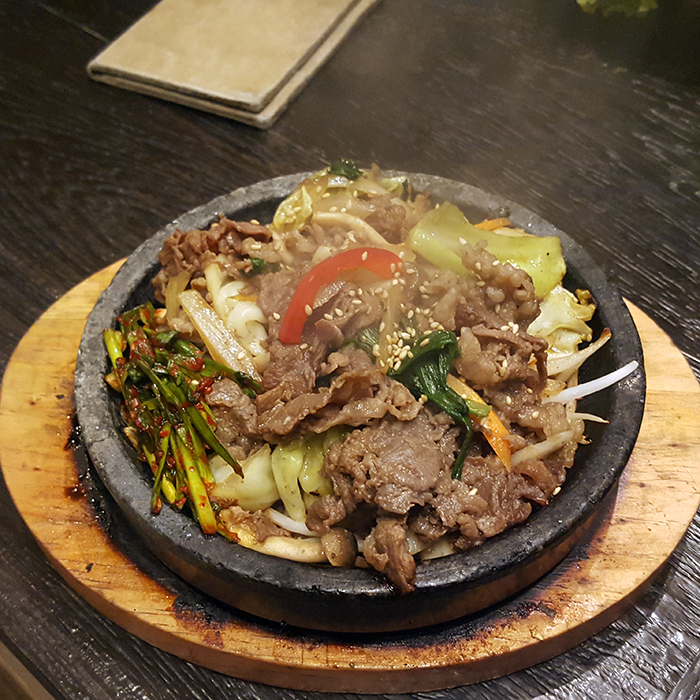 Kyoto was our stop after more than a week in Tokyo. We were struck by a city that was way calmer, smaller and lower buildings. Still lively but not as big and lour as Tokyo. It had some much needed calmness. But that does not mean out culinary adventure stopped. Have a look at the delicacies we tried during our 4-day stay in Kyoto!

After we checked in at the hotel, we went back to the Kyoto train station to feed ourselves. Again, I do not know the name of the place, as everything was in Japanese, so I’ll add a picture of the outside of the restaurant. We started with some delicious dumplings and then had some ramen soup. Yes, I am obsessed with ramen soups. I could live only with this.

After getting back to the hotel and resting a while, we went for a walk, aiming for the centre of Kyoto and its fish market. Unfortunately, most of the stands selling fresh food were closed, but that does not mean that the place was empty. It was full of people and many other shops were open. As we were walking around, we found this place making white bean paste cakes – the smell drew me to it. They were absolutely delicious. I recommend buying them and eating them warm – so good!

On our walk to the Ginkakuji temple, we got quite hungry and it was great that we found a small place where I could have my favourite tempura & noodle soup meal.

One day, as we were wandering in the huge Kyoto train station, checking out the city from the top, we stumble upon the food floor. It’s great that the restaurants in Japan are showing how the food looks like in their windows. That’s how we picked a Korean restaurant, where we had a delicious menu, starting with omelette, kimchi and salad as appetizer, and followed by some delicious meat with veggies.

For us, Kyoto was the place where we checked out museums. After visiting the Kyoto Museum of Art, we went to the restaurant of the museum. Whiel we were waiting in front, a nice older Japanese couple pointed out to me that I should write my name on the notebook at the entrance, so that the waitress can call our names and know the order. There were many things that were not really Japanese, so we went for some club sandwich with chips. I had no bread in Japan (but lots of rice and noodles) and the only time I ate it was now – white, fluffy, sweet bread that I would normally not eat. Nevertheless, the sandwich was good.

After the visit to the Manga Museum, we went to Yayoiken. We loved those chain restaurants with cheap and delicious food! They never dissapointed us not for one second. This one had a bell at the table as well as a lot of pickled ginger, which I absolutely love!

If you are looking for inexpensive and ok coffee, sandwhiches and cakes, Caffe Veloce is a national chain. We tried it in Kyoto some coffee, hot chocolate and the cheesecake (which I felt it tasted very different compared to the one here)

One more thing – one night I was really craving donuts. Even if shops can be open until later in Japan, the donut shop I wanted to check out was closed, so we went to a small supermarket. There, super excited, I saw what looked like a perfect chocolate donut with sugar sprinkles on top. But as soon as I took the first bites, I was full of disappointment, followed by acceptance – it was a round brownie with coconut sprinkles…if you ever go to Japan and crave donuts, pay attention!