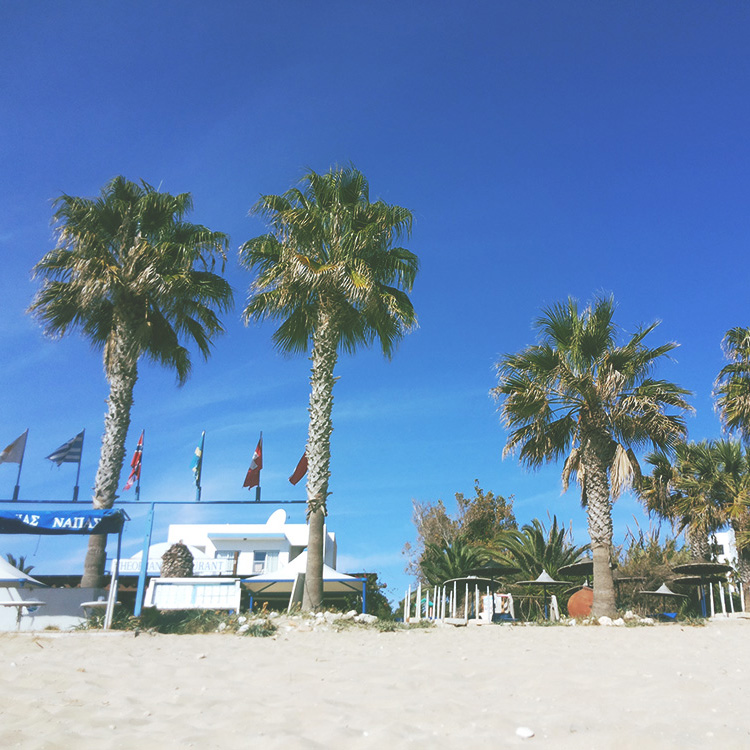 In my last part of my Cyprus travel, I spent one day at the beach, in Ayia Napa (more like 3-4 hours, after more than 1h of traveling & 2 buses).

One hour or so for walking to and on the beach, enjoying the sand and the sea water after more than a year without seaside. The weather was around 20-something degrees, so it was warm enough to sunbathe and take a dip in the water.

After soaking up the sun, the waves and the sand, we had to have some food. It was my last day and I went for a menu I did not try: meat meze. It was a selection of small dishes, starting with a warm green soup, a platter with sauces (hummus, tzatziki, some cream cheese, some cream with mushrooms, olives, cheese, dried tomatoes, and something else), salad, warm pita bread, and then transitioning to heavier food: pasta, omelette with mushrooms, cheese with tomato sauce. Now the meat, you might say it was not a lot, but compared to the food had before it, we were quite full. What followed were 2 platters of meat – accompanied by french fries. There were 1-2 small pieces of each: 2 types of sausages, fried cheese, chicken wings, lamb cutlet, pork steak, chicken steak and something else, but this is what I remember. Sadly, I did not take any photos of the food, but I did take photos of the view from the table.

And yes, Christmas has already come in Cyprus. In Ayia Napa, there were several Santas with reindeers, and the Mall of Cyprus has some Christmas decorations too.

I have to say that those below are pretty adorable (especially the band of dancing & singing penguins!).