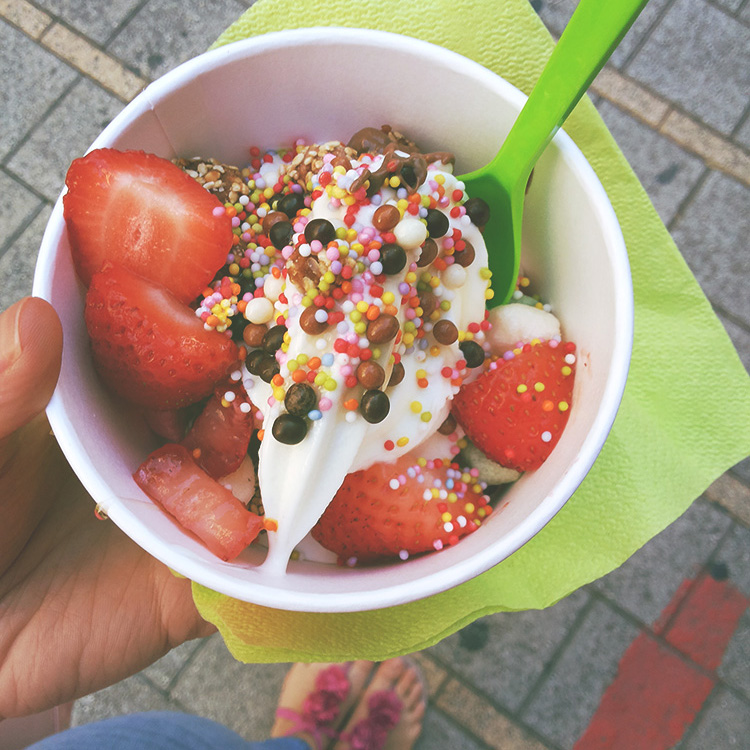 I have tried all kinds of food around here, from Pizza Hut, Wagamama (Japanese food) to Taco Bell and TGI Fridays. In my defense, I have never encountered a Taco Bell, so it was a good opportunity to try it. Also, I enjoyed Costa Coffee every day (cappuccinnos, lattes, chai lattes, everything). And let’s not forget frozen yogurt – it’s my new favourite dessert.

I also discovered two stores where things were so cute & pretty that I just lost it: SUITEBLANCO and TIGER. Fortunately, I just got myself a wallet and a notebook (& you can design the cover yourself !!!).

Ihave also eaten some more traditional food, other than burritos or Jack Daniels steak, such as the chicken souvlaki – with some salad, pita and fries. At Derlicious, a Greek restaurant chain. Besides the food, the inside of the place was also nice, with little quotes in frames hung around.

Not to forget, we also visited the Ethnological Museum / the House of Hadjigeorgakis Kornesios – an example of urban architecture from the last century of Ottoman domination. More on the Hadjigeorgakis, see below, an excerpt from the official website:

Hadjigeorgakis Kornesios was a dragoman, the official interpreter for the Divan (Council) of the Sultan for thirty years from 1779. This title, which was one of the most prestigious titles given to the local Christians by the Ottoman authorities, gave the opportunity to Kornesios to accumulate huge wealth and power. His power brought jealousy to his enemies, who cunningly managed to have him beheaded on 31 March 1809 in Istanbul. (Department of Antiquities, Ethnological Museum, Lefkosia)

Managed to find the Laiki Geitonia District, which looked more touristy than the rest of the Old Center, particularly because of the souvenir shops and booths, and narrower streets.