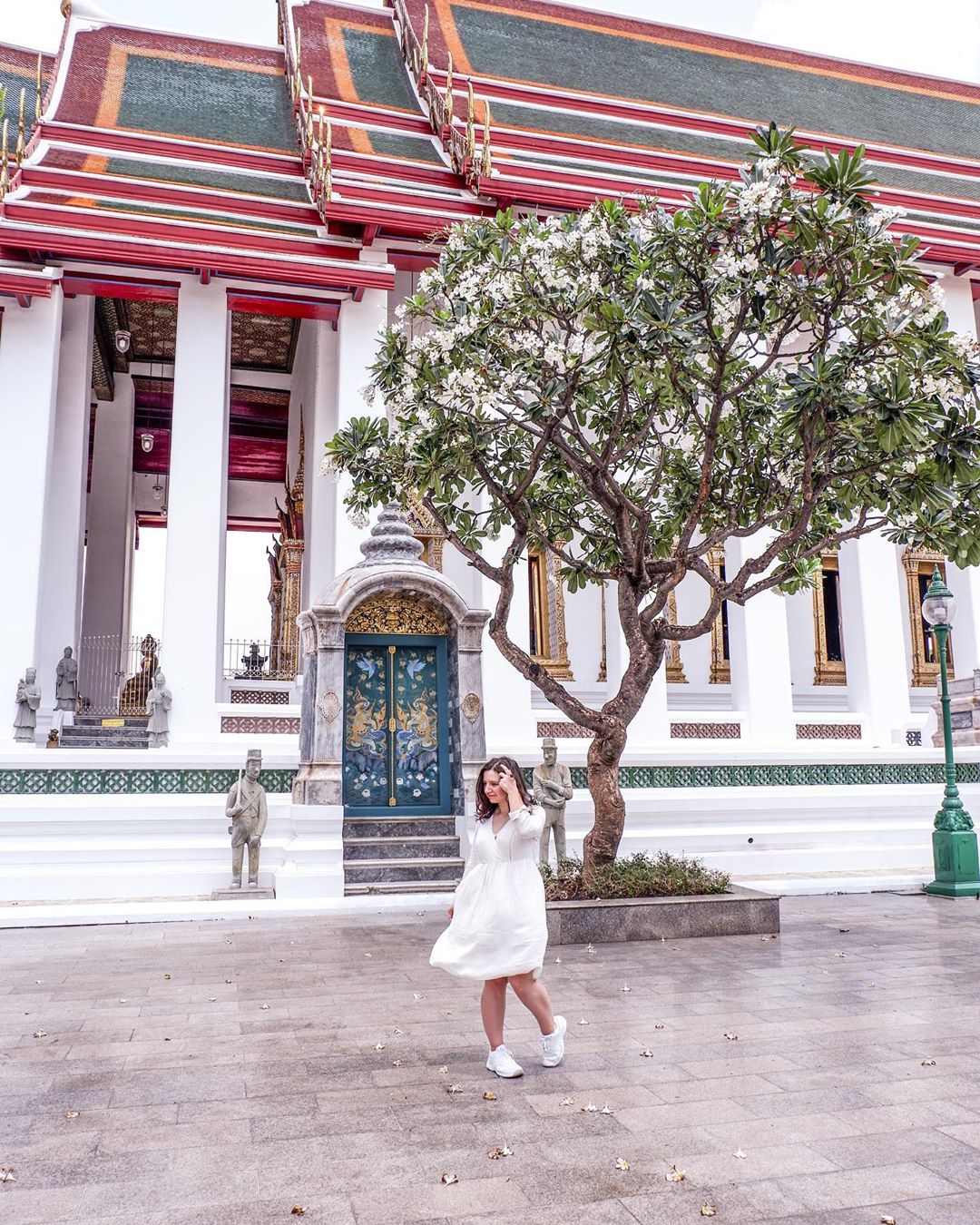 This time last year I was preparing myself to travel to Thailand. Now, we are all staying home, doing our best to practice social distancing and flatten the curve. But that doesn’t mean we cannot look back on our travels or plan more in the future. In case you are eyeing Thailand and would love to visit it in your lifetime, here are 6 must-see temples in Bangkok!

The must-see attractions in Bangkok are the Grand Palace and Wat Phra Kaew  ( or the Temple of the Emerald Buddha). Depending on where you are in Bangkok, you can easily get there by a combination of bus/taxi to the pier and then by boat.

Both the palace and the temple are in the same complex, with the temple being part of the Outer Palace. The temple is regarded as one of the most sacred Buddhist temples in Thailand and is housing the Emerald Buddha image of the meditating Gautama Buddha seated in our position. It is made of green jade (not emerald as the name suggests) and is clothed in gold and diamonds. Did you know that there are 3 different costumers for each season? They are summer, rainy season and winter.

The Emerald Buddha has been at its current location for 238 years now and it is believed to bring prosperity and good fortune to the country.

Within walking distance from the Grand Palace complex, there is the temple complex Wat Pho. The architecture is stunning, much like the one from the Grand Palace complex. If you can stand the heat ( I sure struggled), take your time to admire the beautifully decorated stupas. Do not miss the hall of the Reclining Buddha. This 60m long hall was built over a 46m long Buddha statue, one of the largest in Thailand.

If you take the boat to the Grand Palace, you should see at some point, on the opposite side, the gloriously beautiful Wat Arun temple (also known as the Temple of Dawn). The spire is over 70m height and is decorated with pieces of coloured glass and porcelain, which makes it shine beautifully in the sunlight.

This is a temple that I did not hear of when I first went to Bangkok, but after seeing it everywhere on Instagram, I decided I had to see this beauty myself! Also known as the Marble Temple, the white marble there was imported from Italy.
Take your time to explore the grounds and have a seat by the canal, separating the temple from the monks living quarters

One of the famous sights in Bangkok is the Giant Swing, a 27m tall swing that was actually used in annual swing ceremonies until 1935. The first time I went to Bangkok, I passed by it, but did not think much of the surroundings and continued on my way. Little did I know that there would be a beautiful temple complex next to it – Wat Suthat!

Wat Suthat is one of the most important and oldest temples in Bangkok and is one of the six temples in Thailand of the highest grate of the first class Royal temples. Considering it’s important as well as an architectural beauty, I was surprised to not see many tourists visiting it.

The first time I went to Bangkok, I used to pass by Wat Saket (also known as the Golden Mount) on the way to the hostel, from the Old City. I would see it in all its glory, by day and by night, but did not find the time to visit and climb it. The second time around, I specifically made time for it, and was not disappointed. Aside from the fact that it looks absolutely beautiful from the distance, the way up is a delight.

As you climb through the lush greenery, you are slowly getting views of Bangkok, from higher and higher up. When you reach the top, you are greeted by the fresh breeze and stunning views of Bangkok, with the Old City in the foreground and the modern buildings in the background. Truly a sight to see!